Plan your visit
10 good reasons
to visit the Chateau
Royal chateau of Blois Sound and Light Show Chateau 2.0 Around the chateau
Events

Christmas at the royal château of Blois

100 trees Chic or pop, Christmas is colourful this year. At the château, about a hundred pine trees of different heights flood the historical building.

Sprayed with the colour of the room they are installedin, sparkling and lit up, they echo the exceptionalpolychromy imagined by the architect Félix Duban during his restoration work on the 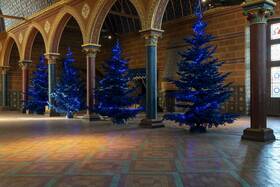 monument in the 19th century.From the General Estates Room where 4 royal-bluepine trees, each 4 meters high get close to thepatterned ceiling with golden fleur-de-lis on a deepblue background; to the golden, red and black onesplaced in Catherine de' Medici's bedroom, or the whitetrees inside the Chapel: in 2021, the château will offer acolour show to remember!

A white Inuit couple, the Anookiare two monumental 5 to 6meters high inflatable characters.Their ice field has melted sothey're travelling the world toraise awareness among thegeneral public in a subtle way,playing with monuments andurban architecture by twisting it, suspending themselves to it, illuminating it and bringing it tolife. Giant characters serving Historyand our planet, they are for thesecond time in France the subject of a spectacular path in Blois' city centre and the château’s courtyard. Poetic, with a cheeky humour, there will befour installations intotal, offering a newlook on heritage. In the Château,installed in front of theentirely illuminated Francis I staircase, the“Anooki Kiss” will give you an opportunity totake pictures in adreamlike, historical scenery. 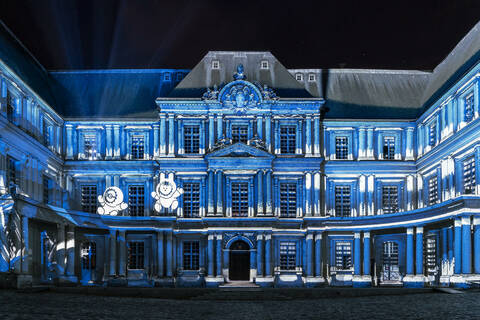 The Anooki illuminate the Château with a funny, joyful,lively and musical sound andlight show.These two bouncy characterstake over the courtyard andtransform this magical placeinto a fantastic playground fullof adventure and surprises.

A monumental projection lasting 8 minutes, played in a loop From 27 November to 30 December each night (free entry)