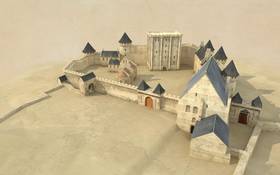 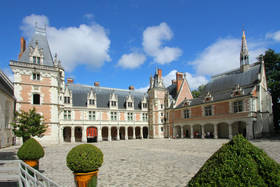 Starting in 1498, Louis XII transformed the fortress into an urban palace. A new dwelling was built for the king, who received Philip the Handsome, archduke of Austria, in 1501.  On the courtyard side, the Gothic building features an open arcade leading to the two stairway towers providing access to the floors. At the front, the long brick facade harbors an equestrian statue of the king. While the edifice remains faithful to the standards of French architecture, the candelabra-laced decors and the arcades display an early Italian artistic influence. In our time, the Louis XII wing is home to the Fine Arts Museum. 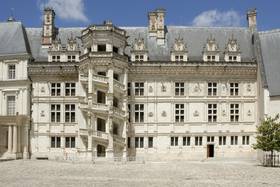 In 1515, right after having acceded to the throne,   François I initiated the first building project of his reign by erecting in Blois an edifice inspired by the Italian Renaissance. On the courtyard side, the majestic facade has in its center the François I staircase whose massive buttresses vividly contrast with the light picture windows. As for the exterior facade, it is inspired by the facades of the lodges elaborated by Bramante in the Vatican. At the time of their construction, the lodges afforded a view of the gardens brought into being  for Louis XII and Anne, the Duchess of Brittany. 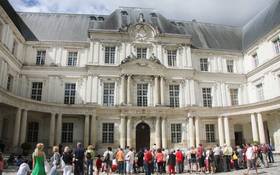