For over a thousand years, the Royal Chateau of Blois has hosted innumerable eminences whose destiny is part and parcel of the history of France and Europe. Counts of Blois, dukes of Orleans, and kings of France have resided in the castle and left indelible imprints.

Often considered as the originator of the House of Blois, which was associated with Champagne, in reality it was from his father, Thibaud « the Elder », that he inherited the county of Blois. As the first count of Blois to coin money in his own name, he totally emancipated himself from the royal power, enlarging his realm to the counties of Chartres and Dunois. His rise was meteoric and led to frequent antagonisms with his powerful neighbors, especially his suzerain Hugh the Great. That is why medieval chronicles had him typecast as a cheater: « Thibaud the Trickster ».

Count of Blois, Chartres and Chateaudun, he was the father of Thibaud VI (1205-1218), the last count of Blois-Champagne. Louis of Blois formed an alliance with his uncle, Richard the Lionheart, to combat another uncle of his, King Philip Augustus. In 1191, he once again followed Richard the Lionheart, and participated in the 3rd Crusade; in 1202, he was one of the heads of the 4th Crusade. Notwithstanding the conquest of Constantinople in 1205, the crusade was a failure and ended in the resounding defeat of King Baldwin I in Constantinople, which is where Louis of Blois died. 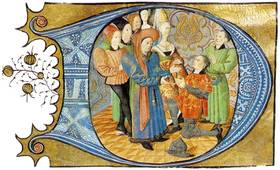 A son of Louis I , and Valentine Visconti, he inherited their taste for literature and poetry, and became a duke at the age of 13 when his father was assassinated. In 1415 in the Battle of Agincourt, he was the commander of the royal armies, but the English massacred the French cavalry and held him captive. Fortunately, his taste for poetry enabled him to endure 25 years of captivity in London. Back in France at the age of 50, Charles married Maria of Cleves and gave up any remaining political ambition. As Blois became his favorite residence, he demolished part of the ancient fortress and erected a more habitable building. He surrounded himself with a small court of erudites and artists to whom he granted his protection, one of them being the renowned poet François Villon.

In 1498 Louis II, Duke of Orléans, became King Louis XII. During his reign, he regularly sojourned in Blois, his place of birth. In 1499, determined to exert control over Brittany, he married Anne, Duchess of Brittany. Having set out to conquer Milan, by 1500 he had subjugated virtually all of Italy, but by 1513, he had been driven out of the Italian territories. Between these dates, given the wealth of Italy and the economic prosperity in Europe, Louis XII became popular as he cut taxes and instilled justice with magnanimity. Dubbed « the father of his people » during the Estates General of 1506, he drew benefit from population growth, technical progress and the development of trade.

Duchess at the age of 11, Anne was the only woman ever to become queen of France two times, first by marrying Charles VIII (1470-1498) in 1491 and then, at his death, by marrying his successor, Louis XII, in 1499. As a symbol of peace between France and Brittany, she vainly defended the independence of her duchy. Thanks to her grandiose funeral and through royal propaganda depicting Anne as a perfect woman, the union of France and Brittany was legitimized. A cultivated aesthete, the sovereign queen was a major patron in many fields: the graphic arts, architecture, music, creative gardening, the decorative arts... Moreover, she greatly contributed to the influence of the Italian Renaissance and art in France.

In 1515, he succeeded Louis XII, whose daughter he had married. During the conquest of Milan, following his victory in Marignan, he presented himself as the « King Chevalier ». He was defeated in Pavia in 1524 and imprisoned by Charles V (Charles Quint). Once he was freed, he governed with a selective council and spearheaded major administrative reforms. Decried for his persecutions of the Protestants after the Affair of the Placards in 1534, he is nonetheless principally remembered for his role as a patron of the arts and builder of magnificent palaces (Chambord). As regards construction in Blois, he was surrounded from the outset by Italian artists. At once king and man of letters, he created the royal library, the royal printing office and legal deposit procedures.

Daughter of Louis XII and Anne of Brittany, she inherited the duchies of Brittany and Milan. Her projected marriage with Archduke Charles, the future Charles V, was desired by her mother but vetoed by Louis XII, who in 1506 had her engaged to her cousin, François of Angouleme, to whom she was married in 1514. Short in stature and dedicated to religion, she had no political role and in 1515, she conceded to her husband her rights on her duchies; for once and for all, Brittany was united to France. While contemporary testimonies characterized Claude as plump and homely, her qualities of heart were extolled. Exhausted by successive pregnancies and underlying disease, she died either in childbirth or after a miscarriage at the age of 24.

Crowned in 1547 and considered as the last of the « king chevaliers », he carried on the political and artistic legacy of his father. While Henri consolidated the power of France by completing previously initiated administrative reform, wars against the Habsburgs indebted the country. And even though Protestantism as well as other forms of revolt was severely repressed, more and more persons, particularly notables, subscribed to the Reformation, which meant that differences between Catholics and Protestants were in no way settled and that after Henri's death, they led to the Wars of Religion.

Daughter of the Duke of Urbino, she became duchess of Brittany and then queen of France when, in 1536, she married the future king Henri II. She went on to give birth to three future kings of France: François II, Charles IX and Henri III. Deeply affected by the accidental death of her husband, she acted as regent and became more and more involved in state affairs, even during the reign of Henri III. She defended the freedom of conscience of the Protestants, promoted peace and advocated civil tolerance. But her policies failed, and time and again, she was accused of being power-hungry and responsible for the St. Bartholomew Day's massacre (1572). Little by little, however, her reputation is being rehabilitated by today's historians.

In 1574, he inherited a divided kingdom over which his authority was vitiated. His reign was marked by serious political and economic problems and punctuated by no less than four wars of religion. Assisted by his mother, he strove to impose peace on his political opponents who were backed by foreign sovereigns, only to witness the exacerbation of existing antagonisms between the Protestant party and the Catholic League. Forced to flee Paris by the Duke of Guise whom he suspected of wishing to overthrow him, Henri lured the duke to Blois by convening the « Estates General », and had him assassinated. Later on, preparing to attack Paris with the support of the Protestants, he was slain by a fanatic from the Catholic League.

Nursing a deep-seated hatred of the Protestants, who had assassinated his father in 1563, he gained considerable popularity during the wars of religion. In 1572, he was one of the instigators of the St. Bartholomew Day's massacre. As champion-in-chief of the « Holy Union », he aspired to govern and thereby cut down the political influence of the Protestants. Once he had become master of Paris after the Day of the Barricades (1588), he gained the upper hand over the king (Henry III), who convened the « Estates General » in Blois so as to thwart his ambitions by setting up a fatal trap; the Duke of Guise was assassinated by the personal guards of the monarch in the royal apartments. The day after, his brother the Cardinal of Lorraine was imprisoned and executed in his turn.

In 1584, Henry of the House of Bourbon acceded to the French throne. As head of the Protestant party, he had actively participated in the wars of religion. Following the death of Henri III, however, and so as to be accepted as the king of France, he converted to Catholicism and forced the Protestants and Catholics to make peace. After more than three decades of war, he dedicated himself to the country's recovery. Against Parliament, he consolidated royal power by surrounding himself with officers whose responsibility was hereditary. Sully, his comrade in arms, helped him to replenish the treasury and ensure economic prosperity. While preparing another war against Spain, he was assassinated.

In 1600, the fortune of her family rendered possible her marriage with Henri IV, to whom she gave a son the year after. Once the king had died and her regency got underway, she consolidated her power by surrounding herself with advisers such as Concino Concini. Feeling humiliated by his mother, who was indeed monopolizing power, in 1617 Louis XIII organized a coup d'état, had Concini assassinated, and exiled his mother to Blois. In 1619, with the complicity of the Duke of Epernon she escaped and provoked an uprising against the king. After a brief return to grace in the 1620s, Marie plotted against Richelieu and was compelled in 1631 to depart from France. Exiled first to the Netherlands and then to England, it was in Germany that she ended her life in poverty.

In 1626, after having rebelled against his brother Louis XIII and Cardinal Richelieu, Gaston had no choice but to marry the duchess of Montpensier. Heir to the French throne, he was nonetheless steadfastly hostile to absolute monarchy and devoted much of his life to conspiracy. Once again banished from the royal court in 1634, he sojourned regurlarly in Blois. In spite of his military triumphs as Lieutenant General of the Kingdom, he had no viable political project and failed in his attempts to overthrow Anne of Austria and Cardinal Mazarin. Exiled by the latter to Blois in 1652, he devoted the final years of his life to the arts and sciences; upon his death (1660) in the François I wing in the Royal Chateau of Blois, he bequeathed to Louis XIV his impressive natural history and art collections, and thereby contributed to the artistic vibrancy of the Grand Siecle.

A noted French architect, he was one of the leading figures of the romantic generation. Awarded the Prix de Rome in 1823, he made the most of his sojourn in Italy, where he discovered antique polychromy and the grandiose painted decoration of the Renaissance. At once rationalistic and eclectic, starting in 1834 and succeeding his master, François Debret, Duban supervised the design and installation of the Ecole des Beaux-Arts in Paris. As a major member of the historic monuments commission, he restored a number of monuments, particularly the Sainte-Chapelle. From 1845 until he died, he contributed mightily to the restoration of the Royal Chateau of Blois, thereby showcasing his extensive knowledge of Greco-Roman architecture and of painting, as well as his mastery of color.

More than 10 counts of Blois and 3 dukes of Orléans once resided in the royal château of Blois.

During the Renaissance, 7 kings and 10 queens sojourned in the château.