The present appearance of the François I wing is due to the restorations by Felix Duban, who imagined the decor of a royal apartment during the Renaissance.
On the 1st floor, the presentation brings to mind the long-gone furniture of the House of Valois. Whether sculpted, painted, gilded or enriched with embroidered textiles, precious household possessions were damaged during the numerous moves imposed by the itinerant life of the court. So it is that not many furnishings have survived and may be seen today.
On the 2nd floor, neo-Renaissance furniture underlines the influence of the Renaissance on 19th-century decorative arts and historical painting. 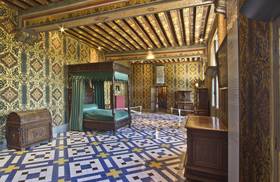 It is customarily stated that in 1589, Catherine de Medicis died in this room. The walls are decorated with the monogram of the queen, which consisted of two C's intertwined with the H of Henri II. This room provides an occasion to describe a day in the life of the queen. First thing in the morning, she went to Mass, after which she received visitors. Once the midday meal was over, she received ambassadors and distinguished guests. During the afternoon, the women witnessed the sporting achievements of the men and could themselves ride a horse, shoot their bows or follow the hunters, but most of the time they would prefer conversation, music and needlework. Last but not least, supper in public was often followed by a concert or a ball. 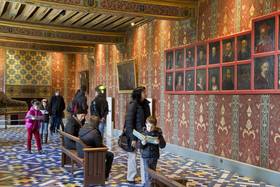 An ideal site for a casual indoor stroll, the gallery afforded access to the royal gardens. An ideal site for receptions, it underscored the roles of music, dance and portrait galleries during the 16th and 17th centuries. Two or three times a week, the life of the court was highlighted by balls, after which the participants played cards, checkers, chess and dice. Queen Catherine used the gallery as a venue for performance of tragedies and Henri III for commedia dell'arte theater. Poets and scholars were likewise invited to receptions, and so it was that in Blois, Ronsard met Cassandre Salviati, the mignonne (sweetheart) of his celebrated poem. 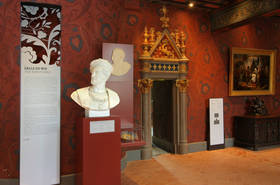 Often alone, at times in the company of one or two relatives or distinguished guests, François I ate his meals in the great hall of the royal apartments. After that, seated under a platform, he held audience and, as was his wont, expatiated on a panoply of subjects. In accordance with French practice, the hall was open to one and all.
Tapestries, carved furniture and silverworks are exhibited and underscore the power of the sovereign and the wealth of the kingdom. The room conserves two fireplaces and a door dating from when the wing was built (1515-1518). On the other hand, the floors and the painted decors of the walls and ceilings are creations of Felix Duban.

Set up by François I prior to 1520, it is the only royal cabinet of the French Renaissance to have been conserved. In the tradition of the Italian studiolo (study), it is dedicated to reading, work, poetry, meditation and collections. The decor consists in 180 sculpted, painted and gilded oak panels that dissimulate four small cabinets, often with concealed doors, which contained small artifacts.
Fashionable in the 1560s, curiosity cabinets are the ancestors of museums. The princes of Europe used them as display cases for different kinds of objects: Wonders of nature, objects of art or travel souvenirs and antique treasures (the 16th century was a time of archeological digs galore...).

From Louis XII through Henri IV, seven kings sojourned in the Château of Blois, which for one century was at the heart of French history. François I centralized royal administration stipulating the sovereignty of the king and divine right. He laid the groundwork for absolute monarchy, which was nonetheless compromised by the Wars of Religion; neither his son Henri II nor his grandsons were able to establish a durable peace. The works presented in this room make reference to the collections of the Valois, particularly those of François I, protector of the arts, who gradually brought into being what might be termed a « museum of the crown ». 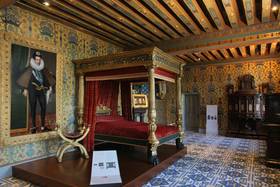 The decor of this room makes reference to Henri III. Frequently caricatured, he was preoccupied with the prestige of the monarchy; in his regulation of court customs he restricted access to the king. This practice at once rendered his person sacrosanct, and served as a model for the elaborate « etiquette » of Louis XIV in Versailles. The impressive size and sumptuous decor of the bed bring to mind the ceremonial function of the room, which was far more than a resting space; it was also a chamber in which the king could receive and hold discussions with his close advisors.
Henri III surrounded himself with a group of favorites, the mignons (the darlings, the dainty ones), and they functioned as a faction opposed to the more influential families; what is more, their frequently frivolous and effeminate appearance rendered Henry particularly unpopular. According to tradition, it was in this room that, on the orders of the king, the Duke of Guise was assassinated.

It is said that along with the King's chamber, the Council chamber, where the king and his advisers would meet, was the theater of the major drama of Blois: the assassination of the Duke of Guise. Coming as the culmination of the Wars of Religion that ravaged France over the second half of the 16th century, this painful episode is the subject of a number of 19th-century paintings. Presented here in chronological order, they describe the events as would a comic strip and underline the highly theatrical vision of romantic painters.
To be seen: One of the first black-and-white films of 1908, which recounts the assassination, is projected in the room. 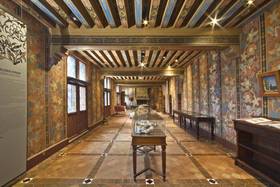 In 1843, Felix Duban rendered the rehabilitation of the Chateau of Blois a model for restoration of the other monuments in the Val de Loire. While his exterior renovations remain faithful, the interior decors were almost entirely created by Duban, who reinterpreted those of the Renaissance. Indeed, the renowned architect used photography, which had only recently been invented, so as to achieve historical verisimilitude and a modicum of plausibility.

In this room, we can examine the camera of Mieusement, a young photographer from Blois who took more than 4000 pictures for the French commission of historic monuments. Copies of some of his photos are also presented, and they will help you to discover the Chateau as it was during the 19th century. 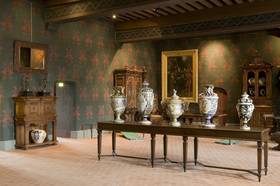 This room presents the furniture and the art objects created in the neo-Renaissance style in the 19th century. The rehabilitation of numerous historic monuments inspired artists in their own creative processes.

Many of these furnishings made waves at the salons and world's fairs of the time. The large vases, for example, were produced in Blois, which was a major faience production center until the middle of the 20th century. The decorative and heraldic motifs of these prominently exhibited vases were inspired by the chateau.